Today’s article follows the life of Alison, from her time growing up in Roma in western Queensland, to her current day life at Yukana Private.

Growing up in Roma

Alison was born in Roma in 1930, following in the footsteps of her father. She was the second youngest of five children. Her father was a shoe repairer, having learnt the trade as an apprentice in Toowoomba. He owned a shoe shop in town which was within walking distance from their house. He worked hard, eventually expanding his business into retail.

Alison was only 9 when WWII began. Living in Roma, she recalls being reasonably unaffected by the war.  Her main memory of that time is of seeing American soldiers travelling through town. She also remembers having two older sisters who joined the WAAF. Fortunately, both of them remained in Australia throughout the duration of the war.

Up until grade 10, Alison attended the local school in Roma. She would walk or ride her bike the short distance each day. In high school she learnt typing, shorthand and book keeping. This enabled her to help her father out at times with a bit of typing.

Moving to the city

After finishing school, Alison began working for an Accountant. She worked here until her mother became ill and the family moved to Toowoomba. She began working in the office at The Chronicle in 1949 as a Stenographer. This included taking shorthand and typing up articles for the paper. At that time The Chronicle was located in Margaret Street.

While working there Alison had a friend who introduced her to her fiancée’s cousin, Len, who lived on the family property near Kalbar. Len would come up to visit and eventually Alison began visiting him on the farm along with her friend and her friend’s fiancée.

Married life on the farm

Alison resigned from The Chronicle when she married Len in February 1951. This was the expectation of women at the time. She moved to the family property with Len. Going from all the luxuries of town life to a farm with no electricity or telephone was a big shock for Alison. This meant no refrigerator, so cold produce was unable to be kept for any length of time. Fortunately the family was reasonably self-sufficient with lots of chickens, pigs and fresh milk at their disposal. Fresh vegetables were grown in the garden and groceries were also delivered several times a week by the cream carrier or mailman.

She and Len took over the farm as her parents-in-law grew older and moved to Boonah. The farm was a dairy property when Alison first arrived. This was hard work, and not very profitable, so the decision was made to sell the dairy cattle. Instead they purchased beef cattle and over time began purchasing more land and extending the property. They eventually purchased a kerosene fridge which was later replaced with a gas fridge.

At one point, Alison and Len moved to Toowoomba after appointing a share farmer to manage the property. After about 5 years the share farmer decided to purchase his own property so they moved back to Kalbar for a time. Len purchased a battery operated lighting plant and then a generator to allow them some luxuries.

When Gillian was only 2 months old, a horse accident was the start of a series of health issues for Len. The accident left him with a badly damaged foot and he came very close to losing it. It took quite a while to recover from his injury. Then, within 12 months, Len was back in hospital for surgery to repair damage to the nerves in one of his arms. Two years later, Len was taking daily trips into Brisbane for radium treatment on a big sun cancer on his lip. The treatment caused ulceration inside his mouth which was very painful for him.

They were tough years for everyone. Alison found herself with a young family, managing the running of the farm. Although they hired a man to help, it was up to Alison to keep the farm going. She talks with obvious pride about her oldest daughter Dianne who was not quite 11 at the time. Alison recalls the wonderful job Dianne did looking after the other children. She was very much the ‘mother hen’, with some of the children still referring to Dianne as ‘mum’.

Despite the hard work, Alison enjoyed being outdoors. When Len’s health returned she and the children continued to help with some of the farm chores.

They finally received electricity and a phone only a few years before they sold the farm. Alison finally got her electric fridge.

Life after the farm

Supporting the family’s growing needs was becoming harder on the farm, so Len began working at the Ipswich butter factory. He eventually made the decision to sell up and move away from farm life altogether. The children made their way through university, married and started families of their own.

The couple continued to be active – Len was always happiest when he was working. However life changed for both of them one day when Alison came home to find him on the kitchen floor. Although he was able to get himself up, she realised he’d had a stroke. Alison cared for him after he came home from hospital and he was recovering well. Then, devastatingly, he had a second, more severe stroke. It was no longer possible for Alison to care for him at home. The children helped them find nursing care for him, bringing them to Toowoomba.

They purchased a house for Alison and Len went into full-time care. Her daughter Gillian moved in to look after her, and support her while she settled into her new life. Len passed away about 7 months later, and after a while Alison decided to make a move to a retirement village. With the help of family, Alison looked at several villages before deciding on Yukana. In Alison’s words, ‘it just felt like home, and it’s felt like it ever since’.

Alison loves the unit she chose for herself. At the age of 89 she still likes to keep active and healthy. She loves the space and feel of her unit. Between the activities at Yukana, spending time with her 6 children, 22 grandchildren and 16 great-grandchildren, she finds her life is very full.  She finds plenty to do when spending a little time in her own company – especially now she can read the paper and play word games on her iPad!

It’s such a privilege to have Alison call Yukana Private her home. We look forward to walking alongside her and sharing life with her. 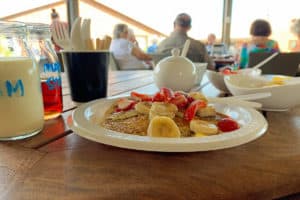