Stories to be told – Alma

In this article we are privileged to hear from Alma who moved to Australia after emigrating  from her home in England. Her story is one that includes her childhood experiences during WWII and her amazing journey to her new home at Yukana Private.

Alma was born in Manchester, England in 1936, spending most of her life there. One of her first memories was the 3rd September, 1939. The day WWII was declared. She clearly recalls she was outside while her mother was in the kitchen and her father at the bottom of their garden. Her mother opened the kitchen window to ask her to go tell her father the news. She hopped onto her little bike and quickly peddled down to deliver the message.

It wasn’t long before Alma’s father was conscripted to the army, leaving Alma and her mother together in Manchester. While other children were evacuated into the country, Alma was fortunate enough to be able to remain with her mother. She recalls the air raid shelter in her back garden. Whenever the air raid sirens sounded, Alma would get dressed into her siren suit and pop down to the shelter.

To pass the time while her father was away, her mother took Alma to old time ballroom dances and dance lessons. Here she learnt ballet, tap and musical comedy dance. She began school at Ladybarn Primary School in 1941. In 1944 she was forced to take nine months off school after contracting Rheumatic Fever. Alma learning dance as a child in Manchester

Alma started her working life in an insurance company looking after the accounts. Alma met her Engineer husband, Frank, at a Saturday evening dance in the hall at St Nicholas Church in Burnage. They were engaged in March 1956 and planned to marry in March the following year. Unfortunately their plans went a little haywire when her father’s office in Manchester was shut down. Her parents needed to move to Devon for him to continue work at the main factory. In those days it wasn’t appropriate for a young lady to live alone so the wedding was moved forward. They were instead married at the end of July 1956. 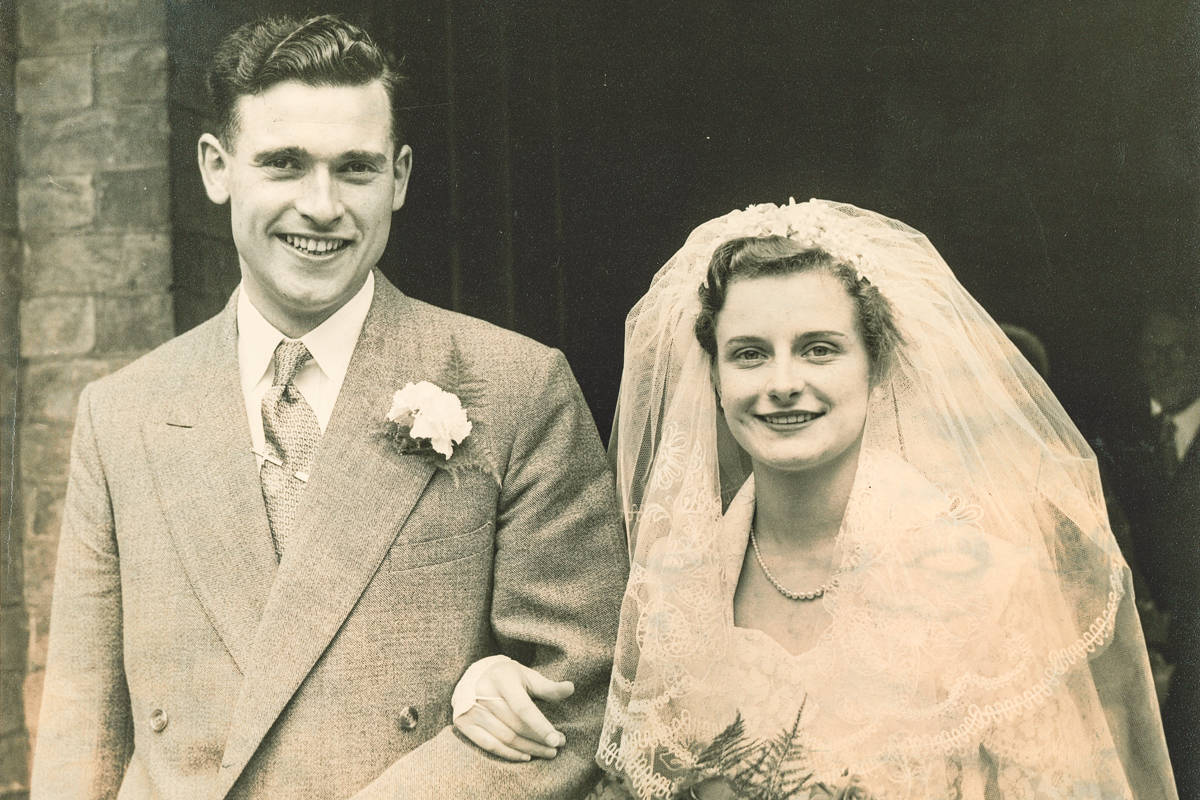 Alma and Frank on their wedding day.

Alma left work in 1958 to have her daughter. She worked from home embroidering children’s knitwear which was mainly sold through Marks and Spencers. She gave this up to have her son in 1962 before taking a job knitting tops at home on a knitting machine. It wasn’t long before Alma purchased her own machine and began working for herself. She found herself particularly busy during Autumn and Spring knitting garments for her friends and neighbours. 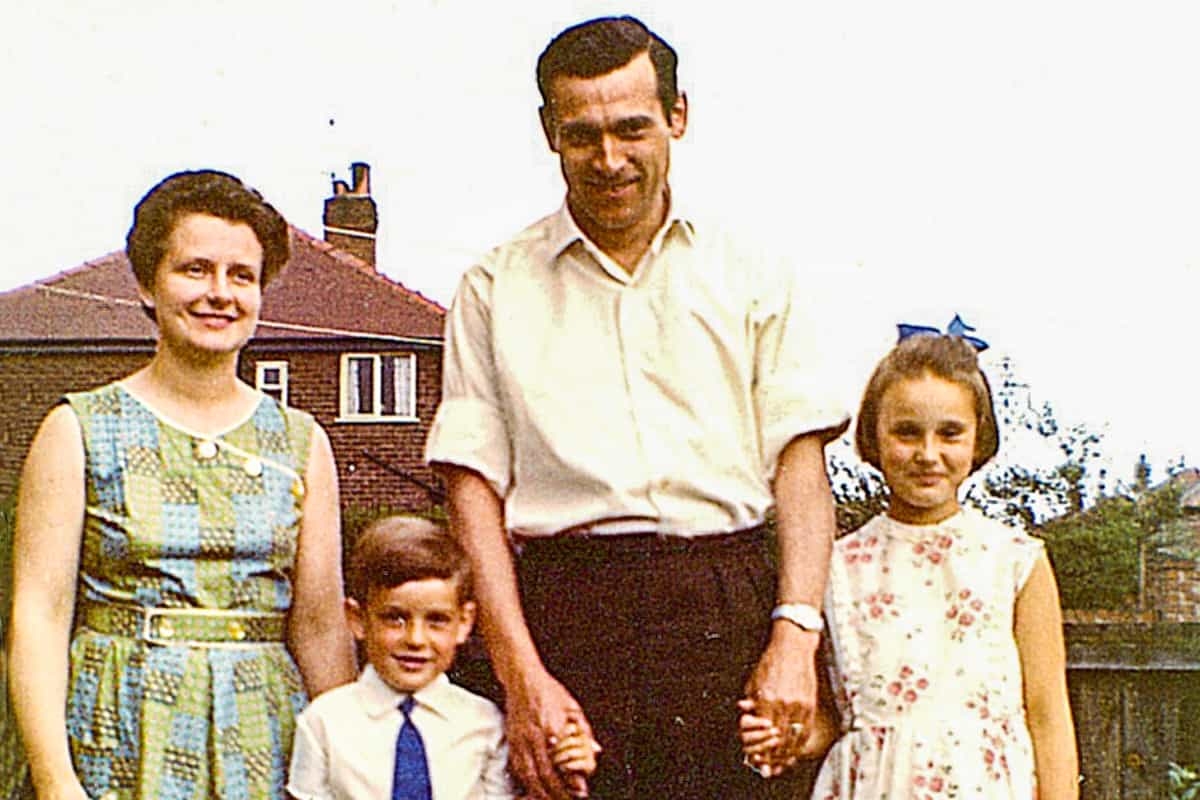 Alma, Frank and their two children in Manchester

When her two children grew up, Alma went back to work. She worked in several offices around Manchester before taking up her final position at a home for German Jewish refugees. Alma enjoyed working there. She helped with the accounts and was responsible for staff wages as well as personal money for the residents. It was here she made the decision to retire.

1981 was Alma and Frank’s silver wedding anniversary. It was also the year her daughter married. After the wedding she and Frank took their first overseas trip, heading off to Spain. They later travelled to other European countries including Thailand, Portugal, Turkey, Greece and Bulgaria. 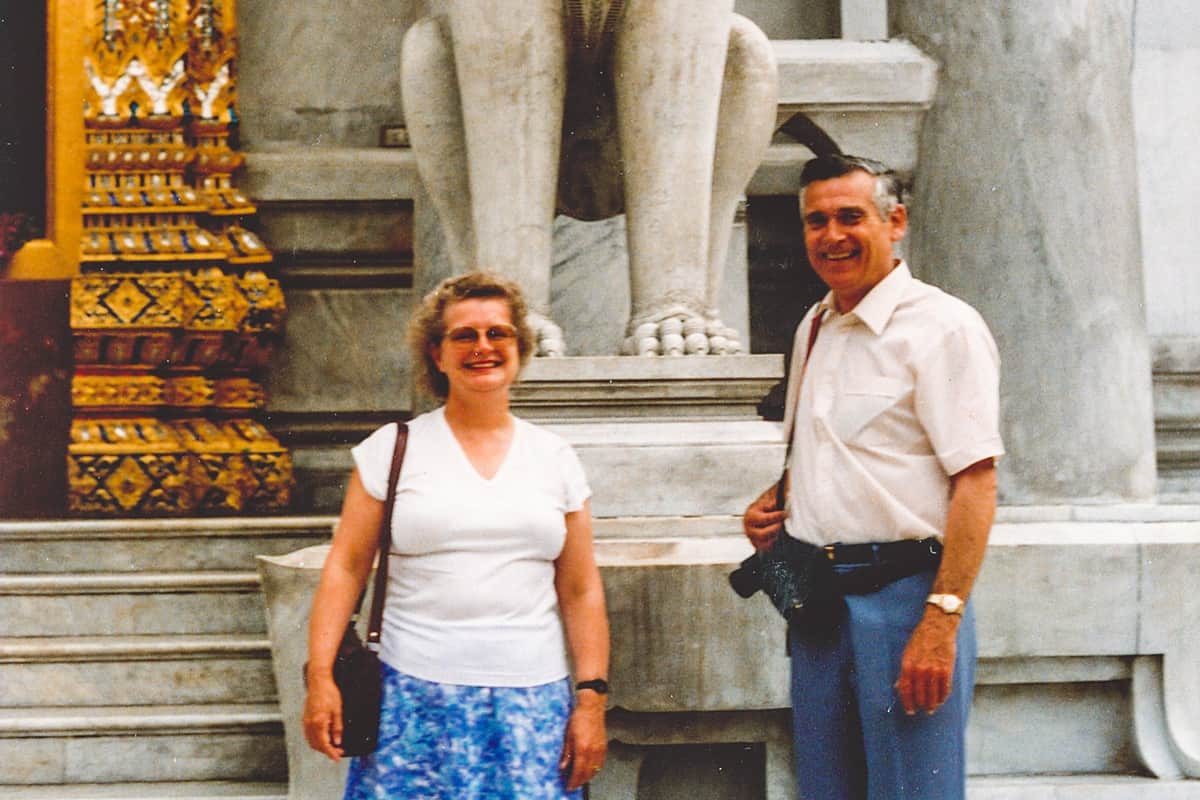 Alma and Frank in Bangkok.

Alma’s son-in-law was offered a job in Australia in 1987. He emigrated from England with Alma’s daughter and her two grandchildren. Alma and Frank visited on three occasions. She and her daughter would always joke that Alma and Frank could move to Australia and live in a granny flat with them.

On their second visit to Australia, they were staying with her daughter who lived near Spring Street in Toowoomba. Alma and Frank would walk along the footpath heading into town. She noticed several retirement villages as they passed by and commented to Frank that she’d like to retire there.

Talk about moving to Australia became a little more serious when Frank became unwell. When he passed away in 2015, Alma found herself alone in their house in Manchester. Her family and friends had all moved away. She was struggling with the house, and realised she had a choice to make. She could move to somewhere smaller in England or take up her daughter’s offer and move to Australia. It didn’t take long for Alma to make up her mind. After discussions with her two children, it was decided the best choice was for her to move to Australia. Alma stayed with her daughter until she was able to purchase a home for herself.

Together, Alma and her daughter had a look at a number of villages before deciding on Yukana Private. It had been recommended to her by a paramedic and suited her very well. As soon as Alma received permission to purchase her unit she made arrangements and moved in just before Christmas in 2016.

Alma keeps herself busy with her hobbies, art and music. She has enjoyed a cruise to the islands with her daughter and spends time at the local U3A. Alma having fun during a cruise to New Caledonia with her daughter.

A highlight was a month long exhibition at the Toowoomba Arts Society showcasing the artworks produced by one of her U3A classes. 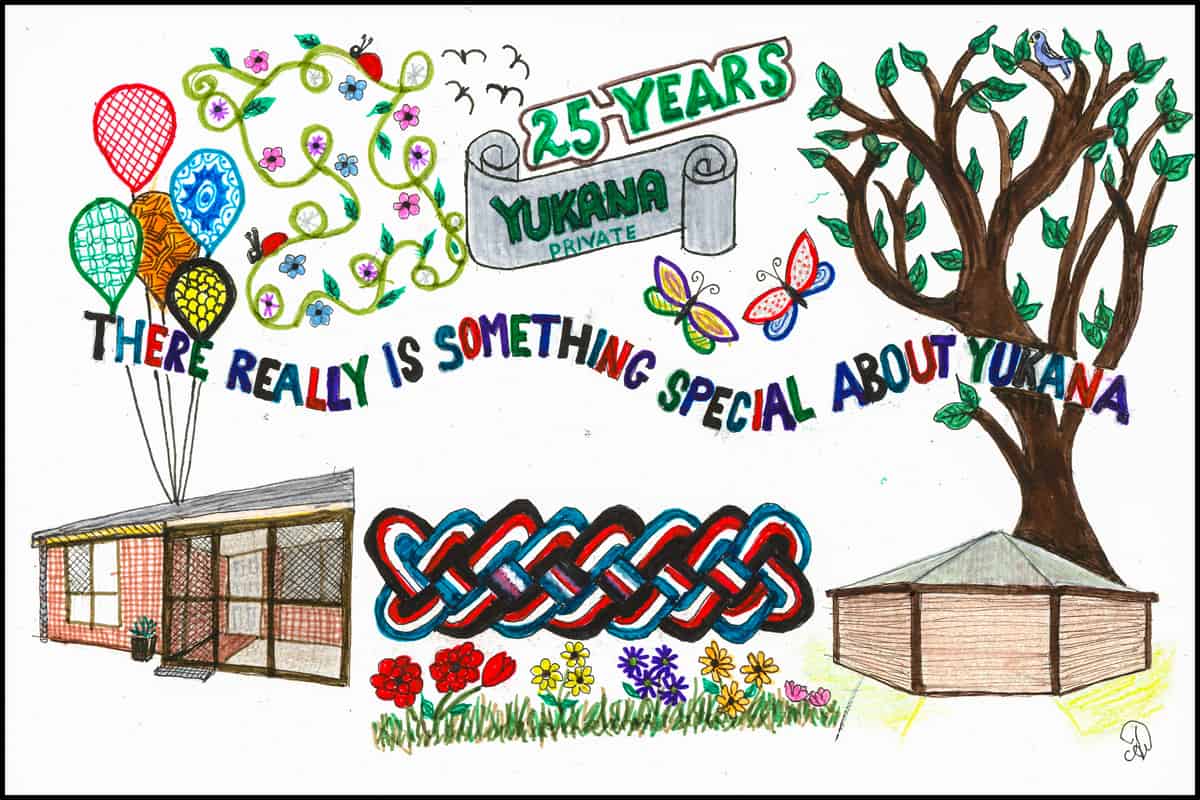 Some of Alma’s artwork, a gift to the staff at Yukana

Alma has never regretted moving to Australia and is enjoying her new life here. We are very fortunate that Alma decided to call Yukana Private home.